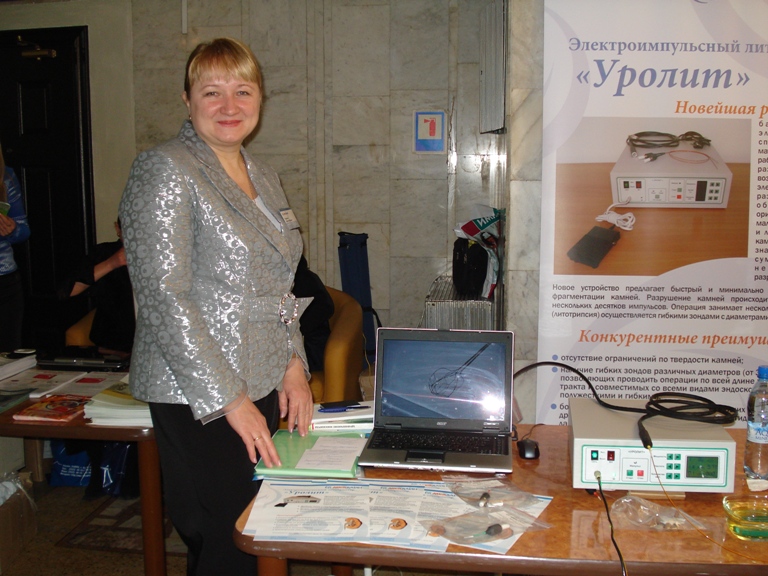 Since its establishment in 2005, MedLine, Ltd. has used the potential and creative energy of Tomsk scientists to design new surgical instruments and devices.

It is the first and only contact lithotripter that uses an ingenious and innovative method of urinary lithotripsy in which calculus destruction occurs from the effect of a nanosecond electrical pulse generated within the calculus bulk rather than on its surface.

The Urolit Lithotripter is successfully functioning in more than 60 medical treatment facilities across Russia and the CIS, and it is being readied to enter the European market.
Information concerning the track record of the Urolit Nanopulse Contact Lithotripter and its advantages can be found in the Urology Magazine: articles by A. V. Gudkov, Chief Urologist of Siberian Federal District, No. 2, 2009, and by urologists of the M. F .Vladimirskiy Moscow Regional Research and Clinical Institute and of the Municipal City Hospital (Zhukovskiy, Moscow Region), No. 3, 2011.
The Urolit lithotripter has a complete package of authorisation documents: Marketing Authorisation issued by the Ministry of Health of the Russian Federation FSR No. 2011/10734, Certificate of Conformity No. ROSS RU. IM32.N00102, License No. 9903001693.
MedLine, Ltd. sponsors and takes an active part in a great number of events organised by the Russian Society of Urologists.
MedLine, Ltd. does not rest on its laurels - we are using corporate intelligence, knowledge and new technology to create a new line of instruments for lithodialysis in other vital organs of the human body.
By supporting technological progress, we hope to contribute to the development of Russia and to its integration into the international community.